Dr. Davies is a graduate of Brigham Young University and Southern College of Optometry where he was honored with numerous awards and scholarships. 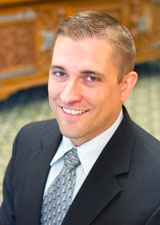