As soccer is a sport of almost constant motion, for the players and the ball, well developed dynamic acuity (ability to maintain visual clarity when players and/or ball are in motion)  is just as significant as good static acuity (smallest detail that can be distinguished in a stationary target/setting, like the goal).

A Sports Vision & Performance Professional can help you to better understand and meet the visual demands most often experienced while playing soccer.

Following are some of the most important dynamic skills associated with soccer.

Eye tracking ability is important in soccer. Quick, accurate saccades (or eye movements) are needed to rapidly survey the changing locations and movements of the other 21 players, and the ball on the pitch. The player must also use saccades to monitor the location of the various boundary lines and goals. Studies have shown that if an athlete's head has to move to aid in eye tracking, his/her performance is not only less efficient, but balance is thrown off too.

Focusing flexibility is also important because the ball and other players move so quickly. The player has to be able to shift focus from near-to-far, or to intermediate targets rapidly throughout the game, while general body stamina is running down due to heavy exertion.

Playing one-and-a half hours of soccer can be very fatiguing, so maintaining a high level of focus throughout the game can be challenging. However, if all players can develop the skill to keep concentration throughout the game and still be able to exploit an opponent's errors on the field, they might find that this is the skill that determines the winning or losing of a championship.

Timing, for receiving passes and jumping up to head the ball at just the right moment, are skills related to good depth perception. The player must be able to judge the speed and spin on the ball, as well as how quickly other players are moving toward or away from him/her.  Also, knowing where you are, relative to other objects, is very important in soccer because traffic patterns on the field can become very congested. No one stays in the same place very long. The ball and the players are all in constant, relative motion. The goals are stationary, but most shots are taken at the goal as the player is moving laterally, vertically, transversely or "all of the above.”

Soccer is a very fatiguing sport which requires excellent conditioning. Physical fatigue can greatly affect concentration, visual reaction time, and eye-hand coordination. Eye fatigue can also affect performance levels in much the same way. When the muscles in our eyes feel tired or strained, we feel the fatigue all over. Just like a weightlifting routine is used to increase physical endurance, visual exercises can be used to strengthen the eye muscles and thereby reduce fatigue. 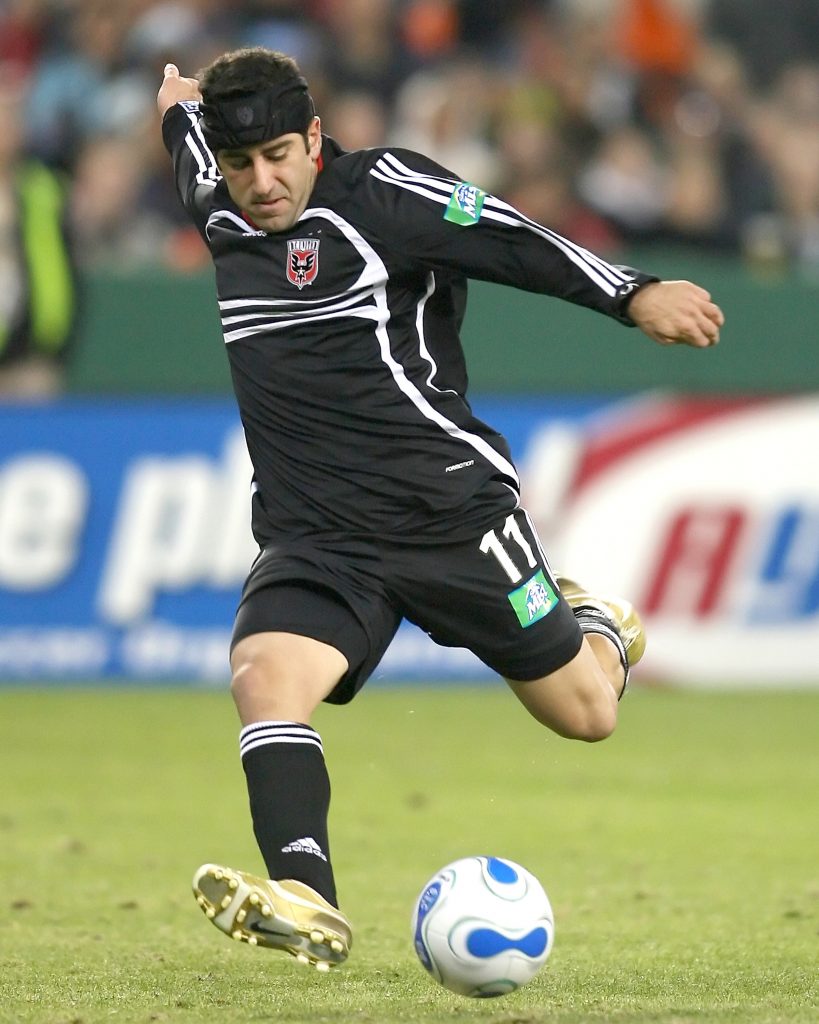 "Soccer is much more mental than it is  physical. Ninety percent of the game is anticipation. I try to  read everything that's happening and then put myself in a good  position." 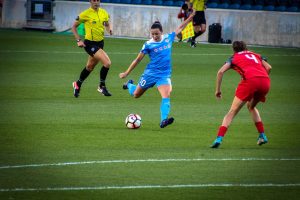 Most soccer players depend more on eye-foot and eye-body coordination, than on eye-hand; except the goaltenders, who are permitted to use their hands to catch, throw and block shots taken on their goal. The eyes lead and the body follows, so the visual system guides the motor system. For the players, exact eye-foot coordination is essential to hit a solid volley or half-volley and to ensure that the ball goes in the right direction and is perfectly on target.

Fixation is a term used to describe what we do when our eyes stop their normal movements to gather more detailed information. Fixations in soccer are seldom in one place very long. They are actually tied in with saccadic eye movement ability. The player's eyes are in constant motion, with quick fixation shifts from the ball, to the other players (his/her team and opponents), to the goal, to the sideline boundaries, etc.

During a free kick, corner kick, penalty kick, etc. the player has the time and space to fixate on a precise portion of the soccer ball (e.g. one of the dark or light hexagonal panels) for more accurate kicking. Perhaps, even some quick visualization can be done in these situations. Fixation would then shift from the target on the ball panel to where the player wants that kick to land on the pitch.

NOTE: Staring at the target too long before kicking the ball can lead to more misses. The ability to fine focus (center) on a target diminishes with time. Therefore, soccer players should be advised to avoid staring. When balanced and ready, he/she should just center on the target's finest detail (first the ball, and then the spot on the field where they want the shot to land) and smoothly execute the free kick. 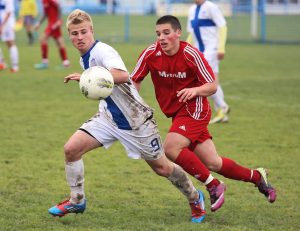 This is not only a very essential skill for superior performance in a game like soccer, but it also helps avoid collision and injury. Each player must be aware of (1) the location of the ball, (2) where he/she should be in relation to the action going on at any given time, (3) where his/her opponents and his teammates are if he is in control of the ball and (4) where he is on the playing field in relationship to the numerous boundaries.

Opportunities to make a proper pass, kick the ball between an opponent’s legs, or tackle an opponent and steal the ball without fouling, only present themselves for fractions of seconds. Also, the soccer ball itself can move at high rates of speed. Once the ball starts ricocheting off players who are fighting for its control, reaction speed can be the difference between winning and losing the battle. The player must be able to absorb a great deal of information, with just a quick scan of the field in order to make his /her decision for play development - i.e. - whether to pass the ball, and where and how to make his next move.